What’s Up with Alabama’s NAEP Scores?

Why does Alabama always land at the bottom of the list for National Assessment of Educational Progress (NAEP) results? 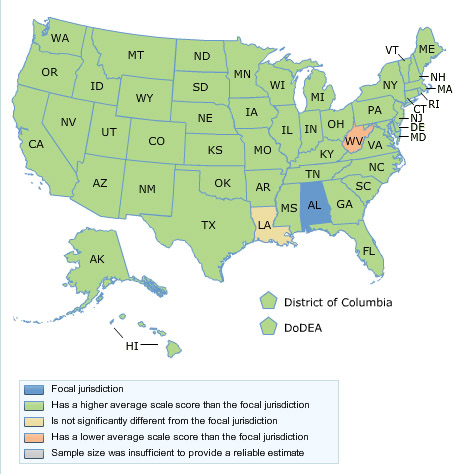 Scores and ranking for 2015 were released late last year, and once again, Alabama found itself near the bottom in the four areas in which the NAEP produces a ranking. The low ranking is not confined to any one racial, ethnic, and ability level, though some demographic groups are lower than others.

Is it a lack of funding? Maybe a lack of appropriately allocating funding to what positively impacts student achievement most?

Is it a lack of alignment of what Alabama is teaching to what the NAEP is testing?

Is it that educators simply don’t look at the results nor adjust their instruction?

Is it that Alabama’s children don’t have the genetic material to learn and then score well on tests?

Is it that educators and administrators don’t have high expectations for our children?

Is it that education isn’t valued by Alabama’s families?

Most folks simply say “it’s poverty” and let it go at that. But blaming it on poverty while keeping the same policy and regulatory framework in place hasn’t been an effective way of improving NAEP scores over the years, has it?

[Here’s a look at five things you should know about Alabama’s test scores.]

When I came across the Urban Institute’s study adjusting 2013 NAEP scores based on demographics of students and other factors, and found where Florida and Texas are doing much better than the simple ranking indicates, I hoped to see Alabama climb the ranks, too.

Spoiler alert: Alabama’s place in the ranks stayed exactly the same even after the adjustment.

One bright spot was that from from 2003 to 2013 (NAEP is administered every other year, so that’s five test years’ worth of time), Alabama’s students made 6.5 months’ worth of learning improvement (rather than 5.9 months as indicated by raw scores) when adjusted for “how much more scores have increased than would have been expected based on changes in demographics”.

Given the ranking of states, and where Alabama’s children find themselves, what impact does this have on students’ ability to gain college acceptance or enter a career and become a productive citizen able to care for their families…particularly if they have the desire to move and work somewhere outside of Alabama?

Given the incredible success of Alabama’s athletic programs, both at the high school and college levels, what is keeping us from having that same success in academics?

Demographics considered in the Urban Institute’s study include racial composition, eligibility for free or reduced-price meals, whether the child is in special education, age, and grade. It’s a not-too-complicated statistical model, and for those who are interested, it appears in in Appendix B in the paper.

NAEP is considered the gold standard of tests, having been first given in 1969. Full results can be reviewed in the NAEP Data Explorer.

Seriously? The State of Special Education in Alabama

How Come Other States’ Students with Disabilities Do So Much Better on the NAEP?

How Come Other States’ Students with Disabilities Do So Much Better on the NAEP?

When Test Data Is Used to Illuminate Hard Work & Success

Not Just the Problems of Other People’s Children

The “Failing” Schools List – What Does It Really Show Us?

This work by Alabama School Connection is licensed under a Creative Commons Attribution 4.0 International License.

Past Editions of K-12 Must-Read News

All past editions available on Storify at https://storify.com/ALSchoolConnect

This website is intended for informational purposes only. The ASC is a nonprofit news organization and exists only to keep the public informed of issues as they relate to the K-12 education system in Alabama. In the event you feel an error has been made, please contact us immediately at the e-mail link below. The ASC does not maintain offices nor a working telephone number dedicated for the organization. Links are provided as a courtesy, not as an endorsement.